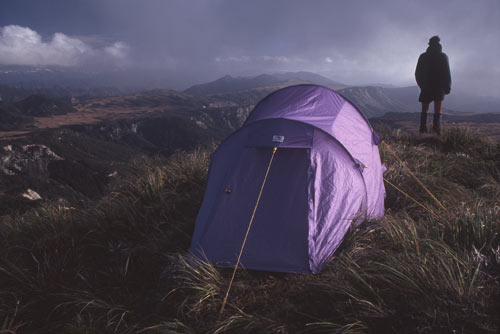 From the peak known as The Needle, a tramper looks south over the two plateaus of the Matiri Range, near Murchison. Several areas in Kahurangi National Park have distinctive flat-topped mountains, formed when a flat band of hard rock protects rocks beneath from erosion. In the Matiri Range a band of hard limestone acts as a cap, forming the Thousand Acres Plateau and the Hundred Acre Plateau (neither of which are as big as their names suggest). In the first part of the 20th century, sheep grazed on the plateau in summer, and were moved to lower altitudes before winter.

by my quick calculation on