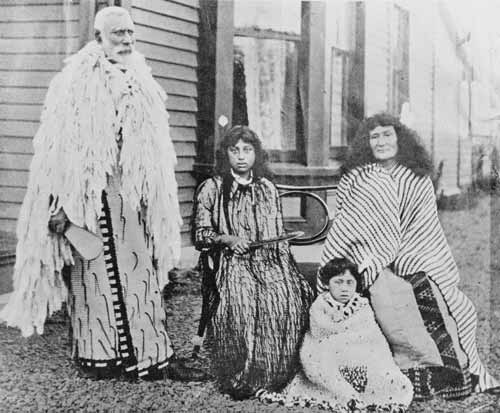 Hōri Kerei Taiaroa became a member of the House of Representatives for the Southern Māori electorate in 1871 and subsequently a member of the Legislative Council. In these positions he consistently argued for full recognition of the terms of the major land purchases from Ngāi Tahu. He had mixed success in this struggle. However, the fact that he could gain positions of political influence and present the Ngāi Tahu case in the formal deliberations of government was an important indication of Māori political rights in the late 19th century. This photograph of Taiaroa, his wife Tini and their two grandchildren, Tini Taiaroa Ellison and Ria Mohiko Wimeera, was taken around the start of the 20th century. Taiaroa died in 1905.