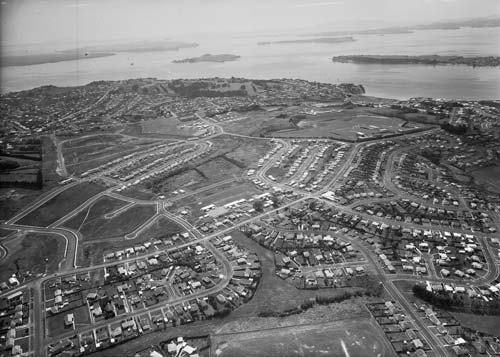 Suburban housing developments mushroomed in the 1950s and 1960s as state-subsidised mortgages made home ownership possible for many families. Among the new suburbs in Auckland were St Heliers and Glendowie, viewed in this photograph taken from Glen Innes. These suburbs were planned as orderly sets of quarter-acre (0.1 hectare) sections, each with a house and a garage. This aerial view indicates both new and planned housing.

While many families aspired to homes in these new suburbs, the experience of living in them was variable. Facilities like kindergartens, community centres and public libraries often lagged behind the development of housing, and there was little access to private or public transport. Women with small children often found their lives quite restricted in these dormitory suburbs.