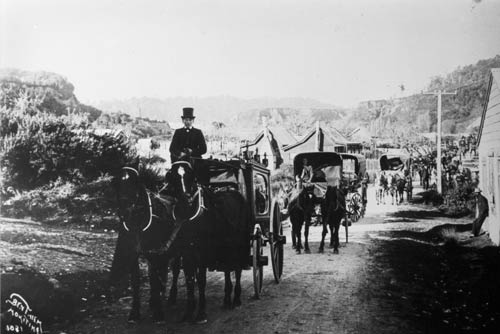 Harry Thompson, a Hokitika funeral director, heads the funeral cortège of George Taylor as it moves through the town on 17 September 1914. Harry Thompson wears the distinctive black suit and high top hat of an undertaker, clothes adopted to indicate the seriousness and formality of funerals and respect for the dead. The horse-drawn hearse is followed by other carts and people on foot. In small towns like Hokitika many members of the community would participate in a funeral and men were expected to doff their hats as the hearse passed. The purchase of a hearse was one of the major capital expenses of people setting up funeral businesses at this time.

Ruth McManus and Rosemary Du Plessis, 'Death and dying - Bodies of the dead', Te Ara - the Encyclopedia of New Zealand, http://www.TeAra.govt.nz/en/photograph/30374/funeral-directors-harry-thompson-1914 (accessed 17 May 2022)