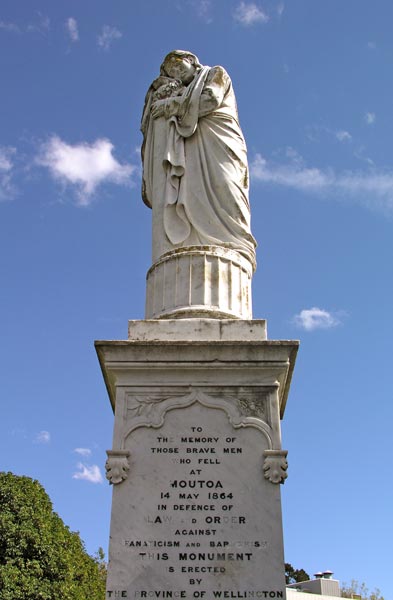 The remarkable Moutoa monument, New Zealand's first war memorial, was unveiled in Moutoa Gardens, Whanganui, in September 1865, 16 months after the battle that it commemorated. The conflict itself had occurred on an island in the middle of the Whanganui River, 80 kilometres north of the city. Lower Whanganui Māori defeated Pai Mārire forces from up river who were intent on attacking Whanganui town.

The citizens of Whanganui were so relieved at being spared the attack that they made a Moutoa flag, 2.5 metres long, of heavy silk with images of the Union Jack and of Māori and European hands clasped in friendship. They also commissioned this memorial. The statue was purchased from Huxley Parker and Co. of Melbourne, and at its unveiling the flag was presented to the local tribes. The memorial listed the 15 lower Whanganui Māori who died during the battle, plus a European priest from the nearby Catholic mission who was shot while allegedly imploring the combatants to stop fighting.