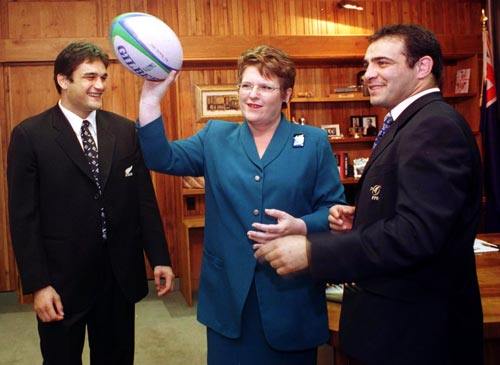 Jenny Shipley famously criticised her predecessor, Jim Bolger, for running the country through backroom deals done over a whisky bottle. Parliament’s boozy, clubby old-boys’ culture had been declining for years, but the first woman prime minister could not turn down a photo opportunity with that blokey institution, the All Blacks. Here Shipley poses with a rugby ball, flanked by All Black captain Taine Randall (left) and Raphael Ibanez, captain of the French team, in the run-up to the last test match played at Athletic Park, Wellington in 1999. The All Blacks won the match 54-7, but later that year Shipley lost the election.