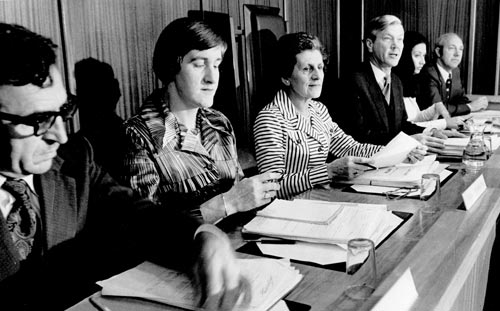 In the 1970s access to abortion became the subject of intense public debate, with vocal support for and opposition to the idea of it becoming more readily available. By 1975 the issue was so controversial that the government decided to take it out of the political arena, and set up a Royal Commission on Contraception, Sterilisation and Abortion. Pictured are commission members (from left) Dr M. D. Matich, Barbara J. Thomson, Dame Dorothy Winstone, Sir Duncan McMullin (chair), Denese Henare and M. R. McGregor. Their recommendations led to the Contraception, Sterilisation and Abortion Act 1977, which made it harder to get an abortion. Because the act was difficult to implement, it was amended in 1978.