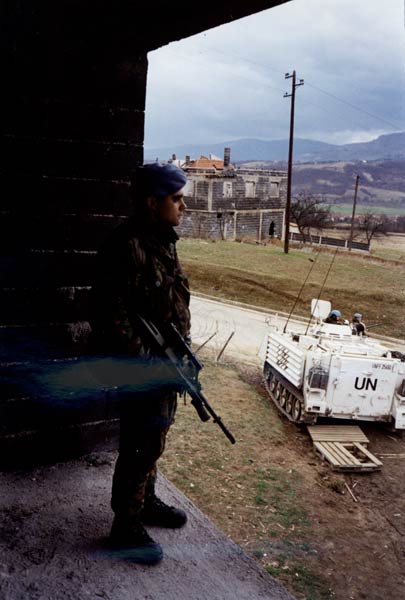 Lance Corporal Simon Namana of the New Zealand army is shown on checkpoint duty in Bosnia in 1995. Peacekeeping has been a New Zealand focus since the United Nations was set up, when Peter Fraser expressed the hope that the new organisation would intervene between warring parties. This concern was reflected in the stance taken during New Zealand's periodic Security Council membership, most notably in 1993–94. New Zealand assisted in the formulation and passing of an international convention designed to protect UN peacekeepers, and offered tangible suggestions for an overdue reform of UN peacekeeping systems. This subsequently included New Zealand representation on a major investigation that produced recommendations on peacekeeping (the 2000 Brahimi Report). In the late 20th century, New Zealand expanded its contribution to UN peacekeeping operations, substantially in the case of East Timor.