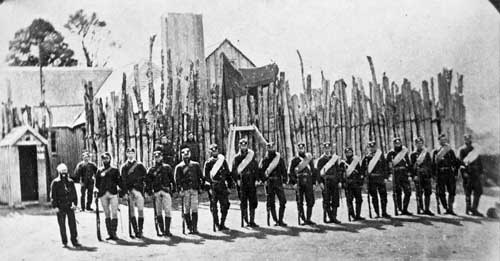 An advance party of the Māori prophet and military leader Te Kooti killed a number of volunteer cavalry at Ōpepe, on the Napier–Taupō road, in 1869. Soon afterwards a chain of fortified police posts, linked by telegraph, was built between Napier and Lake Taupō, including at Ōpepe itself. This photo shows the Armed Constabulary post there in the early 1870s. At first troops did not enjoy being stationed at this dangerous and isolated location, but by the late 1870s they were guiding parties of tourists around the area. The Ōpepe post remained open until 1885.