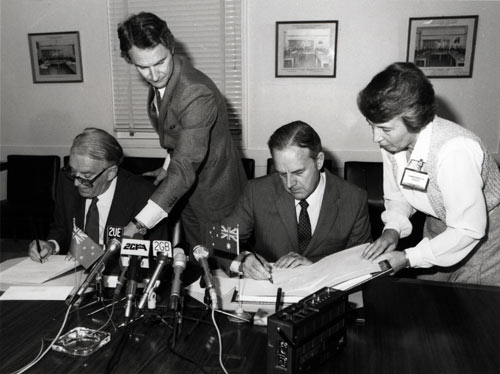 With an aide standing alongside each of them, New Zealand's High Commissioner to Australia, Sir Laurie Francis (left), and Australian Deputy Prime Minister and Minister for Trade Lionel Bowen sign the Closer Economic Relations agreement between the two countries in Canberra, Australia, in March 1983. One outcome of the agreement was the elimination of tariffs (customs duties) between New Zealand and Australia by 1990.

Courtesy of the Department of Foreign Affairs and Trade

Michael Green, 'Foreign policy and diplomatic representation - Foreign policy in Europe and beyond', Te Ara - the Encyclopedia of New Zealand, http://www.TeAra.govt.nz/en/photograph/34291/closer-economic-relations-1983 (accessed 23 May 2022)