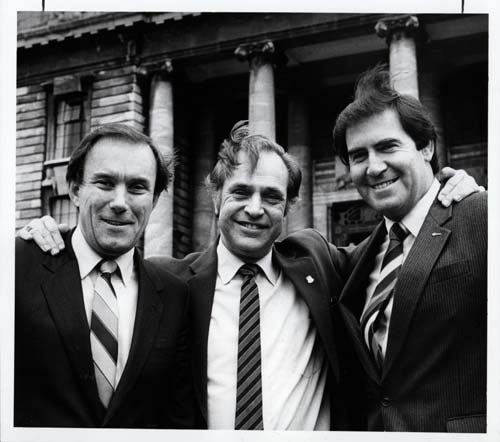 Social Credit party leader Bruce Beetham is shown here in 1984 with the party’s two members of Parliament: Neil Morrison (left) and Garry Knapp (right). In 1966 Social Credit gained 14.5% of the vote and its first seat in Parliament (won by Vernon Cracknell, MP for Hobson in Northland for one term). It was successful again in 1978 when Beetham won the seat of Rangitīkei in a by-election in 1978. He retained it at successive general elections in 1978 and 1981, when Social Credit’s vote peaked at 20%.

In 1980 Beetham was joined in Parliament by a second Social Credit member, Knapp, following a by-election in the Auckland seat of East Coast Bays. Although Beetham was defeated at the 1984 general election, Knapp held his seat and was joined by Morrison, who won the Pakuranga seat, despite the party only receiving 7.6% of the vote nationwide.

Electorates where Social Credit gained more than 10% of the vote, 1975