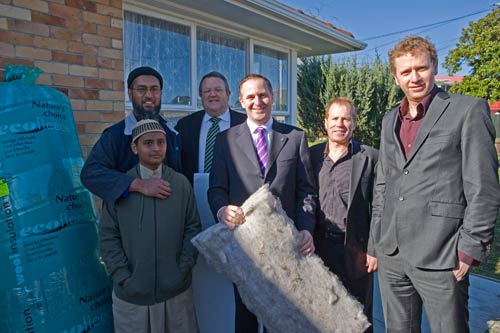 Prime Minister John Key (centre) was photographed with (left to right) homeowner Gaznafar Buksh and his son Hamza, Energy and Resources Minister Gerry Brownlee, Ecoinsulation director Greg Sweeney and Green Party co-leader Russel Norman in Māngere in September 2009, two months after the government's home insulation scheme began. The scheme, which had been promoted by the Greens, was supported by National as part of a memorandum of understanding between the parties. This type of agreement, which allowed a non-government party to participate in cabinet decision-making, had been initiated by the previous Labour-led coalition government.