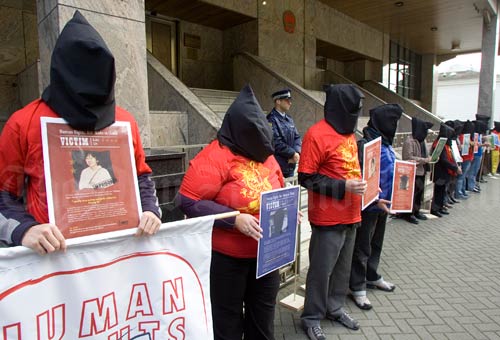 Amnesty International supporters protest outside the Chinese embassy in Wellington in June 2007, aiming to publicise the Chinese government's violations of human rights. New Zealanders have for many years shown concern for international human-rights issues. In the early 1900s meetings were held to protest against the atrocities committed in the Congo by the forces of King Leopold of Belgium. In the 1930s New Zealanders raised funds to help victims of the Spanish Civil War, while waterside unions boycotted the export of scrap metal to Japan in protest against the invasion of China. From the late 1950s the issue of apartheid in South Africa, particularly in relation to sporting contacts, became a major focal point. Since the 1970s New Zealand activists have focused on human-rights issues in Northern Ireland, Chile, East Timor, Zimbabwe, Sri Lanka, Fiji and the former Yugoslavia, as well as the actions of Western nations in the 'war on terror' since 2001.