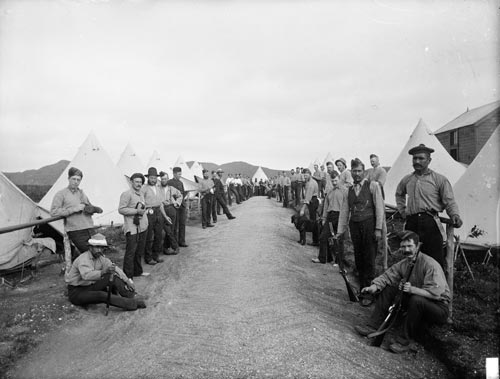 In 1880 the government purchased land at Kāwhia that had originally been bought by an early settler before 1840. This was the first toehold the government gained in the region. Town sections were laid out in 1882 and construction of a road to Alexandra (Pirongia) started the following year. Māori King movement followers were not happy about the road, but opposition was muted.

This changed when beacons to guide ships were erected on land adjacent to the harbour. These were seen as unacceptable claims to the land and were removed, which was taken as a provocation by the government. Ngāti Maniapoto had recently split from King Tāwhiao, and the beacon incident gave the government an excuse to make its only show of force against Tāwhiao, the stationing of a Constabulary Field Force contingent at Kāwhia in October 1883. After discussions with Native Minister John Bryce, Tāwhiao withdrew his objections to the beacons. They were reinstated and the soldiers left.