Opening of the wharenui Raukawa 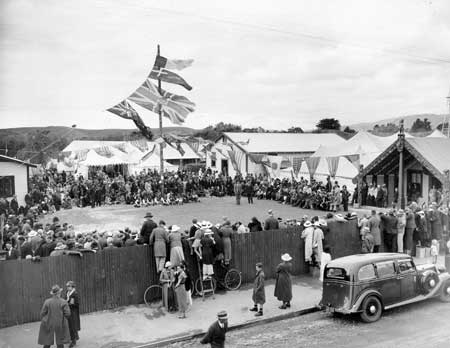 A large crowd assembles on 14 March 1936 for the opening of Raukawa meeting house in Ōtaki. Four tribal flags fly in a row. From top is the Ngāti Kapu flag, called 'Tainui'. It is a reverse tricolor, which symbolises the arrival of father Jean Baptiste Comte, a French Marist priest who came to Ngāti Kapu in 1844 and encouraged the hapū to embrace Catholicism. On the flag is the Tainui waka (canoe) and a star, Tu-kai-te-uru. The flag was a gift from Māori King Tāwhiao to Ngāti Kapu. Next is the Ngāti Raukawa flag, which features a cross and the word 'Raukawa' on it. Next is the Ngāti Huia flag, which is a Union Jack with the word 'Huia' on it. This flag was a gift from Lord Onslow, the governor of New Zealand, delivered by his son, Huia Onslow, to the Ngāti Huia people in the early 1900s. Last is the Ngāti Wehiwehi flag. It is similar to the New Zealand flag but has the words 'Ka kite ano taua' (we will meet again) and symbols emblazoned upon it.