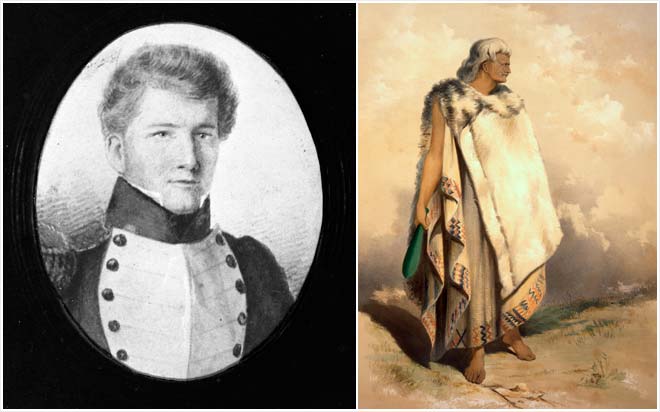 Arthur Wakefield (left) and Te Rangihaeata (right) were leading protagonists in an armed engagement which was a foretaste of things to come in the New Zealand wars. The New Zealand Company had established a settlement in Nelson in 1842, led by Wakefield. With little agricultural land available in the Nelson area, so the settlers looked to the Wairau valley, which the company believed it had purchased. Ngāti Toa chiefs, especially Te Rauparaha and Te Rangihaeata, disputed this and removed a surveyors' hut. On 17 June 1843 Arthur Wakefield led a force of almost 50 armed settlers to execute arrest warrants against Ngāti Toa. When shooting broke out, possibly accidentally, a stray shot killed Te Rangihaeata's wife, Te Rongo. At least four Māori and 22 settlers (including Wakefield) died, with many of the Pākehā killed as utu (revenge) for the death of Te Rongo. Richard Aldworth Oliver's c. 1850 painting of Te Rangihaeata shows him holding a mere (club) which had belonged to Te Rauparaha.

Books about the New Zealand wars