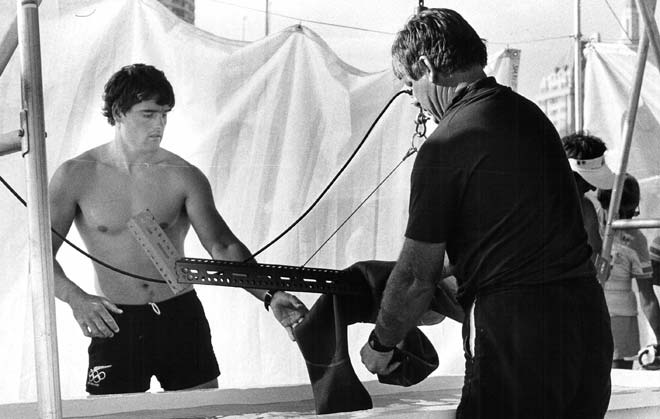 New Zealand sailor Russell Coutts (left) has his gear weighed after the final race of the Finn class at the 1984 Los Angeles Olympics. In the Finn class each sailor's gear needed to weigh under 20 kilograms. On first weighing, Coutts's wet gear was marginally over this limit and he faced disqualification. His gear was dried out, rearranged and weighed twice more, finally coming in under 20 kilograms. Only then was he awarded the gold medal.

Joseph Romanos, 'Olympic and Commonwealth games - On the water – the 1980s at the Olympics', Te Ara - the Encyclopedia of New Zealand, http://www.TeAra.govt.nz/en/photograph/37912/russell-coutts-los-angeles-1984 (accessed 8 July 2020)