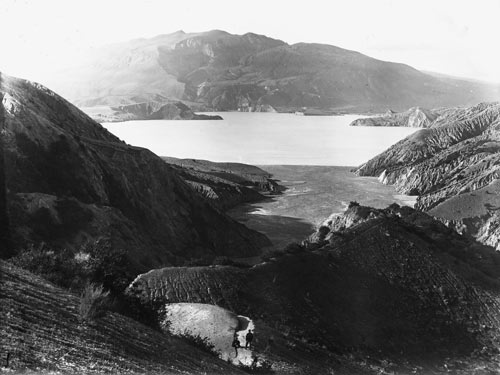 When Mt Tarawera erupted in the early hours of 10 June 1886, tourists were asleep in Te Wairoa hotels and Māori were settled in their houses. When pelting mud landed on roofs, many buildings collapsed, crushing those inside. In all, over 100 died in the Tarawera eruption, which remains the largest volcanic eruption since European settlement. The devastation unleashed onto the surrounding countryside can still be seen in this photograph, taken 17 years after the event. It shows Mt Tarawera, Lake Rotomahana and the Waimangu Valley craters. By the early 2000s, the raw mud-splattered hills evident in 1903 were covered in regenerating native bush.