The story of Boulder Bank 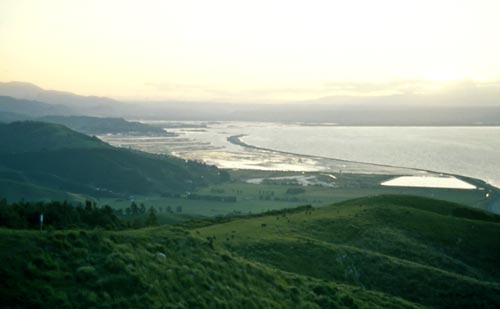 The Boulder Bank area around Nelson, pictured here, was familiar to early navigators such as the famous ancestor Kupe, who appears in this story about how the bank was formed.

Local traditions say Kupe was at Chetwode Island in Cook Strait, catching fish and birds and preserving them for the journey home to Hawaiki. Two of his crew, Pani and Kereopa, left the expedition and remained with the tangata whenua. They made small canoes and departed westwards from Chetwode Island towards D’Urville Island, but kidnapped Kupe’s daughter as a hostage.

Kupe became angry and gave pursuit; his canoe Matahourua soon gained on the absconders, who threw the girl into the maelstrom of French Pass. Kupe was forced to delay the chase to rescue his daughter. By the time the Matahourua could again close on Pani and Kereopa, they were well south into Tasman Bay. As the Matahourua neared, Pani and Kereopa separated, Pani fleeing north back towards D’Urville Island.

Kupe kept after Kereopa, who chose to hug the coast. Passing Wakapuaka, Kereopa began to utter prayers which caused the rocks at Mackay’s Bluff to shift. Kupe’s warriors could not get around the bank of boulders, which was named Te Taero-a-Kereopa. The bank grew almost to the sands of Tahunanui, and formed the harbour (Nelson Haven). Kereopa was able to get ashore and flee south to safety.

Kupe then set off after Pani, who passed around the northern side of D’Urville Island and attempted to cross the turbulent passage between it and Stephens Island. Pani’s canoe was overwhelmed in the rips and currents now known as Hell’s Gate. The petrified canoe remains as a reef in the passage, and two of Pani’s daughters are the sentinels as the curious split rock formation. Pani is still paying for his audacity – his spirit is trapped in a cave (Te Ana a Pani) and can be heard wailing as tides and storms surge around his eternal prison.

Descendants of Kereopa are found in Ngāti Kuia and Ngāi Tahu. Their prowess as tohunga karakia (experts with powers through prayer) has been acknowledged. Even Te Rauparaha was in awe of Houa, a priest of Ngāti Kuia, and recruited him to assist his attack on Ngāi Tahu’s Kaiapoi pā in 1831.