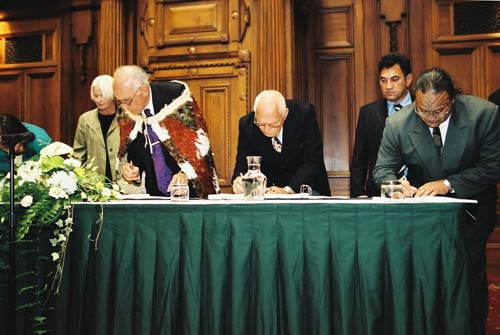 During the 1990s Ngāti Awa took claims to the Waitangi Tribunal. Following a tribunal report on the confiscations in 1999, negotiations with the Crown led to a draft settlement in July 2002. The agreement included a formal apology, the transfer of seven sites of significance to Ngāti Awa, and a combination of cash and land to the value of $42.39 million. Here Hirini Moko Mead, John Wilson and Pouroto Ngāropo sign the draft deed of settlement while Margaret Wilson, the minister in charge of Treaty negotiations, and Paul Quinn look on. The following year, in March 2003, a final deed was signed. The settlement was concluded early in 2005.