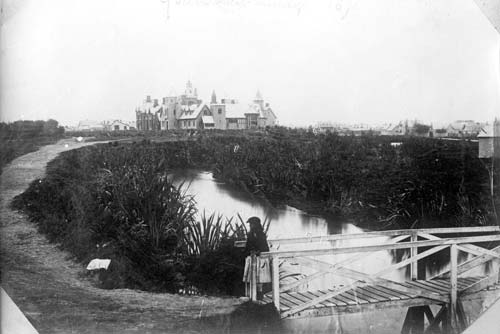 In the mid-19th century public clocks in New Zealand were rare. In Canterbury at that time there were plans for a metal clock tower as part of the Canterbury Provincial Council chambers, and the flat-roofed timber base designed to hold the clock can be seen in the front and middle of the chambers in this photograph. However, the building’s wooden frame proved inadequate to hold the metal tower. It was temporarily installed in the courtyard, and then went into storage, while the clock itself was placed in the stone tower at the Armagh Street entrance to the chambers. Its chimes could be heard, but its face was not seen.