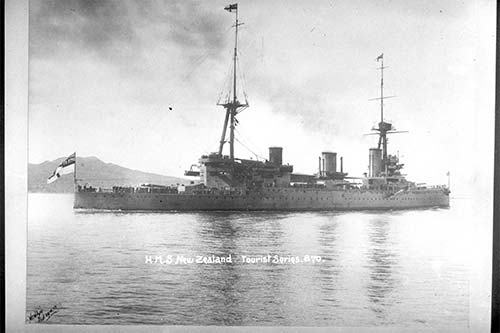 As a colony and later a dominion of Great Britain, New Zealand depended on the distant ‘mother country’ for trade and defence in the late 19th and early 20th century. Britain was then the world’s greatest naval power, ranging widely through the oceans. In 1909 New Zealand offered a battle cruiser to Britain’s Royal Navy to assist in the expansion of its naval programme. This ship, HMS New Zealand, was commissioned in 1912. The following year it sailed out to New Zealand and toured the country. Subsequently it took part in the First World War.

Bill Mansfield, 'Law of the sea - Control of the oceans', Te Ara - the Encyclopedia of New Zealand, http://www.TeAra.govt.nz/en/photograph/6959/hms-new-zealand (accessed 20 May 2022)