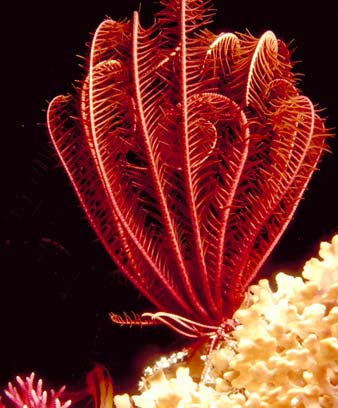 The stars that live in the ocean are just as fascinating as those in the night sky. Starfish, sea lilies, feather stars, sea urchins and other colourfully named creatures belong to the group known as echinoderms (meaning spiny skinned). They share a distinctive five-segment symmetry and other features that range from practical to bizarre.

Underside of a starfish

You might not think there is much in common between the prickly, five-armed starfish and the lumpy sea cucumber of the deep ocean. But they are both members of an intriguing group of sea creatures known as echinoderms. Their name means ‘spiny skinned’. The sea urchin (or kina) has lots of spines and looks like a small hedgehog. Sand dollars have tiny prickles. Other echinoderms, such as the sea cucumber, have none at all.

Where do they live?

Echinoderms are found in oceans around the world, and 617 species are found in New Zealand waters. They may live on rocky coasts, reefs, or on the deep ocean floor.

Echinoderms have several unusual features, including:

You can sometimes find starfish (or sea stars) in rock pools. If one of their arms breaks off, it will regrow. To eat prey, a starfish covers the creature with its stomach, digests the food, then pulls its stomach in again. New Zealand’s biggest starfish reaches 75 centimetres across and has seven arms.

Sea urchins are also known as sea eggs. The most common species native to New Zealand is called kina. They have a round shell with spines to protect them from predators. The mouth is underneath, and their main food is brown seaweed. Some people like to gather kina and eat them straight from the shell.

Sand dollars are a type of sea urchin, living off creatures in mud and sand. Their flat, circular shells are sometimes washed up on surf beaches – often broken into segments.

Mostly living in deep waters, the other echinoderms include:

Print the full story
Next: Page 1. Spiny-skinned animals Next