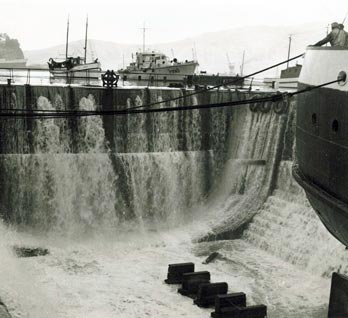 Because of its long, exposed coastline, New Zealand is vulnerable to destructive waves that periodically surge onto its shores. Since the catastrophic Indian Ocean tsunami of 2004 and east Japan tsunami of 2011, there has been a sharpened awareness of the dangers.

What is a tsunami?

A tsunami is a series of broad waves in the sea (and sometimes in a lake). The cause is a movement on the sea floor – from an earthquake, a volcano erupting, or a landslide. Spreading like ripples from a stone thrown into a pond, they move outwards, travelling as fast as a jet aircraft.

When they reach shallow water the waves slow down, but they become higher, sometimes 20 metres or more. They can be like a wall of water that crashes, or fast-rising water levels. They rush far inland for many minutes, moving faster than you can run. People caught by the waves often drown, or are killed by debris, and buildings are destroyed.

Tsunamis in the Pacific

Tsunamis can occur in any ocean. But most of them happen in the Pacific Ocean, triggered by the earthquakes and volcanoes there. Tsunamis over a metre high reach New Zealand about 12 times every century.

It could take 12 to 15 hours for a wave from a South American earthquake to arrive in New Zealand. The Pacific Tsunami Warning Center in Hawaii tells New Zealand if a tsunami is expected. Radio, television and internet announcements, phone text messages, and sirens warn people to move away from the coast.

If an earthquake near New Zealand triggers a tsunami, there may not be time for an official warning or sirens. If you are on the coast during an earthquake that is strong or lasts longer than a minute, hear unusual noises from the sea or see water rising or receding from the shore, move immediately to the nearest high ground or as far inland as possible.