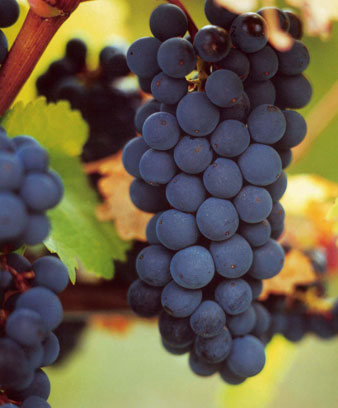 The first vineyard was planted in New Zealand in the early 1800s – today, rows of grapevines spread across former farmland in Marlborough, Central Otago, Hawke’s Bay and the Wairarapa, the sign of a burgeoning wine industry. Most wines are produced from sauvignon blanc, pinot noir and chardonnay grapes.

Viticulture is the science of growing grapes. In New Zealand, grapes are mainly grown for wine.

For most of the 20th century, grapes were mainly grown in the warm northern North Island. Experts said they couldn’t be grown in cooler southern areas – but from the 1970s, some people planted grapes further south anyway, and went on to make award-winning wines.

Grapes grow on woody vines which lose their leaves and become dormant in winter. The fruit is produced in bunches, and is harvested in autumn.

Through most of the 20th century, most grapes grown in New Zealand were American varieties or European–American hybrids. They were resistant to phylloxera (an aphid which damages the vines’ roots), but didn’t produce good wine. Since the 1970s, growers have planted European wine grapes instead – mainly sauvignon blanc, pinot noir and chardonnay.

Grapevines need cool winters, and a warm period in summer and autumn to ripen the fruit. Frosts can harm the young shoots or fruit, and growers use heaters, wind machines and water sprays to stop frost damage. Vineyards in dry eastern areas need irrigation in summer.

The plants do best on free-draining, infertile soil, but in New Zealand are planted on many different soil types.

Vines are grown in rows, on wire trellises to help them get plenty of sunlight. They are pruned each winter – at least 90% of the last season’s growth is cut back. When ripe, grapes are harvested by machine or by hand.

Phylloxera is the most serious pest. The aphid sucks sap from the vines’ roots, and the plants become weak and lose their leaves. Phylloxera can spread from one vineyard to another, and is now found around the country. To prevent it, vines are grafted onto resistant rootstocks.

Birds sometimes eat the ripe fruit, and rabbits can remove the bark from young vines.

Fungal diseases like powdery mildew and botrytis can damage grapevines – so can leafroll viruses, which are spread by mealybugs.

Print the full story
Next: Page 1. Grape growing in New Zealand Next