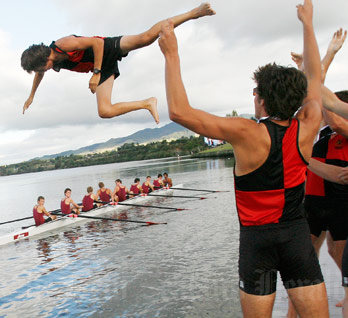 Named after the mighty Waikato River, which winds through the region, Waikato is known for its lush, tranquil pastures, but has a turbulent history. Now it is New Zealand’s foremost dairy-farming region, with other major industries including coal mining, hydroelectricity generation, timber milling and pulp and paper manufacturing.

The Waikato region, south of Auckland in the North Island, has valleys and coastal lands separated by ranges. The Waikato is the most important river in the region.

The region has around 30% of New Zealand’s wetlands. Many other wetlands have been drained to create farmland.

Most of Waikato’s native forest has been cleared for farming, but some remains in forest parks and on mountain ranges. Native birds are common in wetlands and near the coast. Endangered animals in the region include the black mudfish, Hochstetter’s frog, and the Te Aroha stag beetle.

Waikato is the ancestral region of tribes descended from people who came to New Zealand on the Tainui waka (canoe) in the 13th century. They include Ngāti Maniapoto, Ngāti Toarangatira (Ngāti Toa), Ngāti Raukawa, tribes of the Marutūahu confederation, Ngāti Mahuta and Ngāti Hauā.

Māori had settlements throughout the region, usually on hilltops, or beside lakes or harbours. From the late 1700s there were struggles between tribes for land.

From the 1820s traders and adventurers arrived. Missionaries came from the 1830s to run churches and schools. They also taught farming techniques, and Māori farmers sold their produce in Auckland, Sydney and California.

The King movement and war

The Māori King movement (Kīngitanga) began when chiefs realised that Māori would have to unite to keep their land, customs and mana. In 1858 Waikato chief Pōtatau Te Wherowhero became the first Māori king. Most Kīngitanga followers believed Māori and British laws could co-exist, but the government saw the movement as a threat and opposed it.

In 1863 government troops invaded and eventually forced Kīngitanga supporters into the area now known as the King Country. Much Māori land was confiscated. The Māori king and his people returned to Waikato in 1889. After protests and Waitangi Tribunal hearings, some confiscated land was finally returned and compensation paid in 1995.

The first settlers were soldiers. They were followed by land speculators who established large farm estates. Most early settlers were from England, Ireland, Scotland or Australia. The population grew rapidly from the 1920s. Hamilton emerged as the main town, and in the 1970s became New Zealand’s fourth-largest city.

Waikato has ideal conditions for cows and is known for its dairy farming. The region also has sheep and cattle farming, and is well-known for horse breeding.

Organisations such as the Ruakura Research Centre have been set up in Waikato to research agriculture or provide services to farmers. In the 2010s the agricultural Fieldays at Mystery Creek, near Hamilton, was the largest event of its kind in the southern hemisphere.

Coal is mined near Huntly. Some of it is used at the Huntly thermal power station. Electricity is also generated by hydro dams on the Waikato River.

Forests of introduced trees were planted in south Waikato from the 1920s and a timber processing industry grew up there from the 1940s.

Most of the region is covered by three general electorates: Waikato, Hamilton West and Hamilton East. There are two Māori electorates: Hauraki–Waikato and Te Tai Hauāuru.

There are several museums in the region, including Waikato Museum in Hamilton.