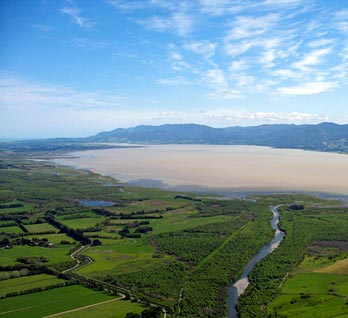 In the south-east of the North Island, Wairarapa stretches from the Tararua Range to the east and south coasts. Its northern border runs from the Manawatū Gorge to Cape Turnagain.

Masterton is the main town. Other towns include Carterton, Greytown, Featherston, Martinborough, Pahīatua and Eketāhuna.

Archaeological sites show that Māori settled around Palliser Bay in the 14th century. The Rangitāne and Ngāti Kahungunu tribes moved into the region later, and still live there today. The two tribes lived peacefully, and often intermarried. They fought off invading tribes.

Europeans arrived in the Wairarapa in the 1840s. They farmed land leased from Māori, and founded the towns of Greytown and Masterton.

In the 1870s, settlers from Scandinavia and other places came to clear the dense forests of the Forty Mile Bush, in northern Wairarapa. They farmed the cleared land and built towns.

During the New Zealand wars of the 19th century, there was no fighting in Wairarapa – relations between Māori and Pākehā remained good. Still, by the end of the wars, Māori had sold most of their land and couldn’t afford to buy any back. Many Māori found farm work or, much later, moved to the towns.

Wairarapa once made most of its money from sheep, beef cattle and dairy farming. Farming is still important today, but so are other industries, including forestry, fishing and horticulture.

In the late 1970s, grapes were first grown near Martinborough to make wine. Since then, many wineries have been set up. Tourism has also increased. Many visitors come from Wellington.

Since the 1980s, some businesses have closed, and people have moved away. But others have moved to the region from Wellington to enjoy a quieter lifestyle.