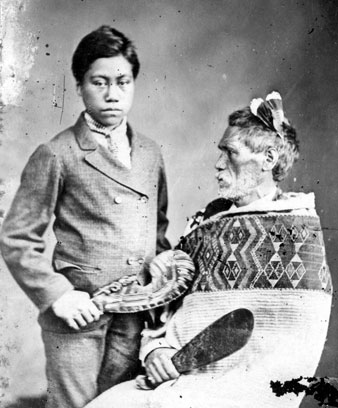 Whāngai is a customary Māori practice where a child is raised by someone other than their birth parents – usually a relative. Common types of whāngai include a grandchild being raised by grandparents and taught tribal traditions and knowledge, or an orphan or illegitimate child being taken in by a family.

Whāngai is a customary Māori practice where a child is brought up by someone other than their birth parents – usually another relative. Whāngai may be temporary or permanent. A parent who takes on a child is called a matua whāngai, and the child is a tamaiti whāngai. The child knows both its birth parents and whāngai parents, and the whole community is usually involved in the decision.

The demigod Māui was raised as a whāngai by his grandfather, who taught him tribal knowledge.

Uenuku, the personification of the rainbow, tricked Ihuparapara into having sex with him by taking the form of her husband. Ihuparapara had a daughter, whom Uenuku took away and had raised as a whāngai.

Tūtānekai was born after his mother Rangiuru had an affair outside marriage. Her husband, Whakaue, acted as a matua whāngai and treated Tūtānekai as his own child.

The practice of whāngai has often happened outside of Pākehā law. From 1901 whāngai children had to be registered with the Native Land Court so they could inherit the lands of their whāngai parents. The Adoption Act 1955 promoted secrecy about adoption and a complete break between birth and adoptive families. It rejected the open practices of whāngai. However, Māori have continued to practise whāngai.

Well-known people who were raised as whāngai include:

Print the full story
Next: Page 1. The custom of whāngai Next