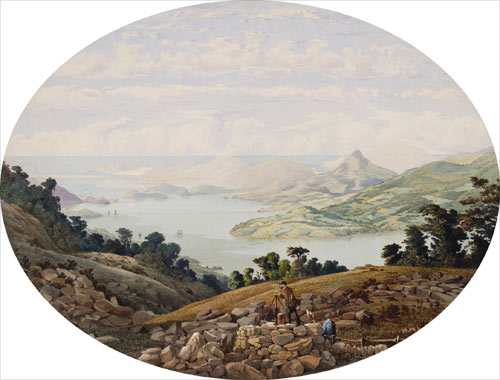 Early settlers found few safe natural harbours around the South Island. Otago Harbour, eroded from an ancient volcano, provided safe anchorage, and was chosen as the site for the city of Dunedin. George O’Brien’s 1872 watercolour, ‘Otago Heads from Signal Hill’, shows the harbour before the surrounding hills were largely cleared of forest.

Poet Brian Turner wrote about the peninsula on the harbour’s south-eastern side.

There, beneath a portcullis of rain lie the bones of time-rent men and women.

They lie awash in the slush that saddened and sometimes defeated them.

Scabby hedges cling to the slopes of hills yoked by sky.

Nothing is left untouched by sparse sunlight, slanting rain, fists of wind punching

the ribs of the land. Here, under tough grasses and the crust of sheep and cattle tracks

crumble the fondest dreams and prophecies. No one came who stayed to conquer, no one came

who was not beaten down or turned away for another time.