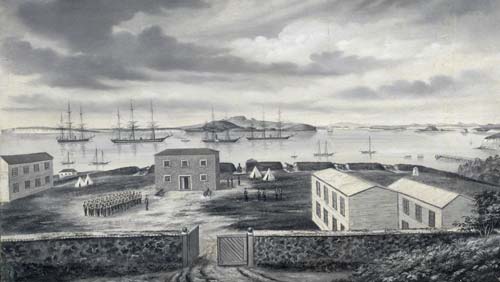 Situated on Point Britomart, and using the defences of an earlier pā, Fort Britomart was built as an army barracks. (The British flag was first unfurled on the headland on 16 September 1840.) The initial building was completed in 1841, and other buildings were added in response to external and local threats in subsequent decades. The fort closed in the early 1870s and operations were transferred to the nearby Albert barracks. Point Britomart was then excavated to provide fill for waterfront reclamations. This painting by Sam Stuart shows the fort in 1869.