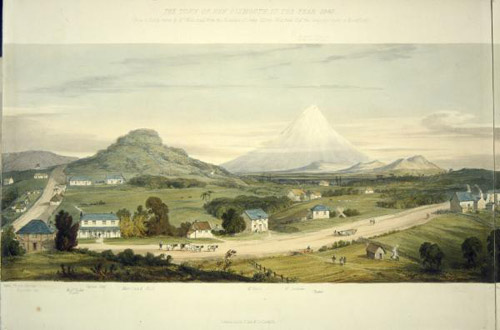 This hand-coloured lithograph showing New Plymouth in 1843 was published as part of the New Zealand Company’s advertising campaign in Britain to attract more migrants. It has all the features of English pastoral bliss, with neat thatched cottages and tidy farms. The reality was somewhat more basic, and the changeable weather and lack of a harbour for unloading supplies were constant sources of concern. Earthquakes too were a new and worrying experience, as settler Richard Chilman recorded in his diary:

‘We have had a most miserable week ... blowing hard with a great deal of rain and everything saturated. We were terribly alarmed last night ... by the sharp shock of an earthquake. We had been in bed for an hour or two, and were awakened by a sudden jerking, and the noise of the plates and dishes etc rattling.’