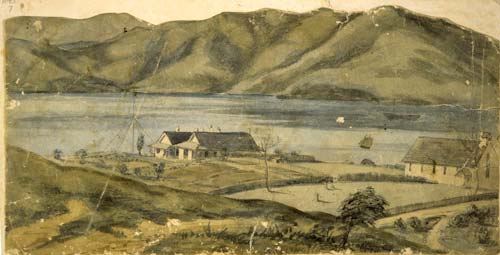 In 1865 Governor George Grey moved into New Zealand Company agent William Wakefield’s old house in Wellington (shown here in the 1840s). Regretting its demolition in 1871, the Wellington Independent noted that after Wakefield, the house ‘was transferred to the paternal rule, which it has survived, of Downing Street, and it has lived to seen the rise and progress of real self-government … there the reticent astuteness of Wakefield, the garrulous pen of Eyre, the oblique statesmanship of Grey, and the constitutional rule of Bowen have from time to time, affected the fortunes of New Zealand’ (19 April 1871, p. 2).