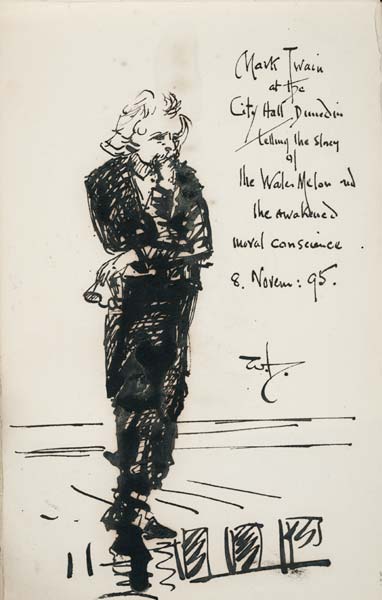 Mark Twain was one of a number of well-known writers who toured New Zealand giving lectures and recording their impressions. Twain visited New Zealand in November 1895, and gave three lectures to large audiences at the City Hall in Dunedin. Most of the sessions were taken up with readings from Twain's writings. The story mentioned in this illustration concerned an incident when Twain stole a watermelon, discovered that it was green and unripe and was so smitten with guilt that he returned it to the farmer – to be given a ripe melon in return. Twain found New Zealand very English, with charming scenery, and he was impressed by Māori. He considered they ranked as 'a semi-civilization – or at least ... a quarter-civilization'. (Mark Twain, Mark Twain in Australia and New Zealand. Ringwood: Penguin Books Australia, 1973, p. 319)