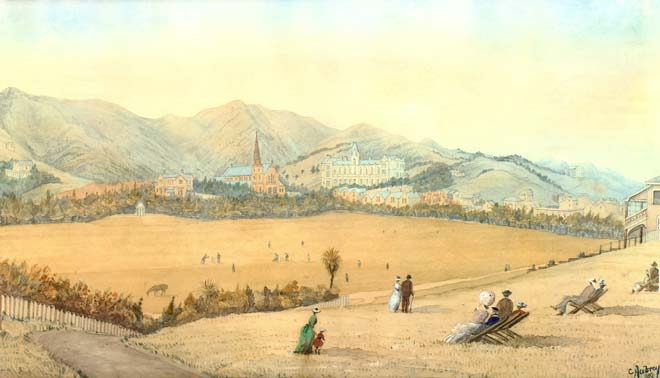 Christopher Aubrey's painting shows spectators watching a game of cricket at the Basin Reserve in Wellington in 1889. The reserve had originally been a shallow lagoon linked to the harbour by a stream. However, the 1855 earthquake lifted Te Aro Flat two metres, and two years later a group of citizens succeeded in getting the provincial government to set the land aside as a cricket ground and public park. It took time, fund-raising by Wellington cricketers, and prison labour to drain the ground and prepare it for cricket. The first game was played in January 1868. That year a grandstand was built, and in 1873 the first first-class game was played there. The first international was played against Lillywhite's All England team in 1877, and the first official test match on the ground was in 1930. By January 2015 the Basin had seen 57 tests, and was widely regarded as New Zealand cricket's favourite ground.