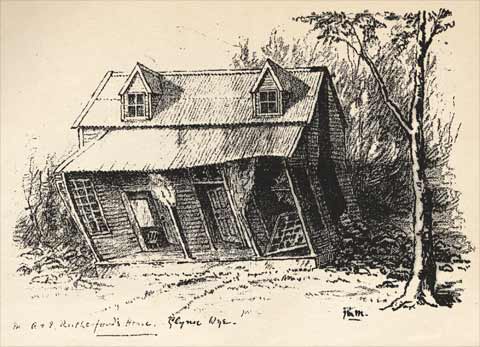 This sketch of a cottage close to the epicentre of the earthquake is from the illustrated supplement to the Weekly Press, 14 September 1888. The original caption reads: ‘Glynn Wye, the house occupied by Mr. Thompson, a manager of the station for Messrs. A. and D. Rutherford, stands on a terrace above Kakapo Creek. The effect of the earthquake on this house can be seen by looking at this picture, most extraordinary, for while the ground floor was twisted several degrees out of the perpendicular, the upper story remained quite straight, as if nothing had happened, and received no injury save that caused by the fall of the chimney outwards.’