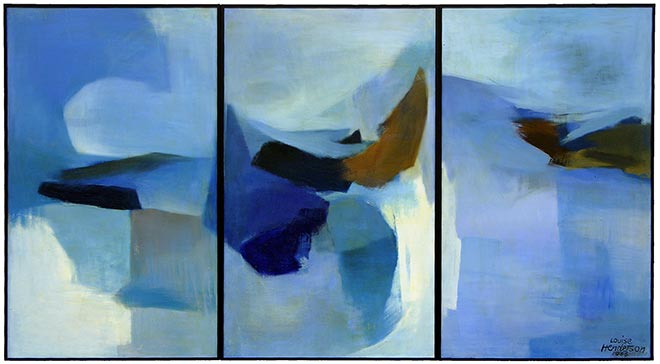 Born in Paris in 1902, Louise Henderson was educated there before joining her husband in Christchurch in 1925. She taught at the Canterbury College School of Art and exhibited with The Group, an association of local artists. In 1950 she moved to Auckland and there, with the encouragement of cubist John Weeks, and, later, of Peter Tomory at the Auckland Art Gallery, she developed an interest in cubism and abstraction. A period in Paris in the 1950s strengthened this. After her husband died in 1963 she painted more than 40 lyrical abstract works in a series called 'Elements – air and water'. 'The lakes' was part of that series and was painted in 1965. Like much of her later work, it can be read as a purely abstract work, but it also has clear references to the natural world, as indicated in the title.

Courtesy of the Louise Henderson estate.