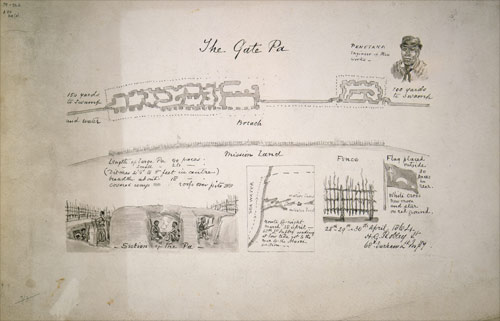 These sketches relate to the battle of Gate Pā, on 29 April 1864, when British forces were defeated by Ngāi Te Rangi defenders. Across the top is a plan of the principal earthworks, dugouts and palisades made by the Māori defenders. At right is Penetaka Tuaia, regarded as the designer of the works. Below from left: the fortifications; their location (on a map with a south orientation); a sketch of a palisade; and a Māori flag flown on the day of the battle.