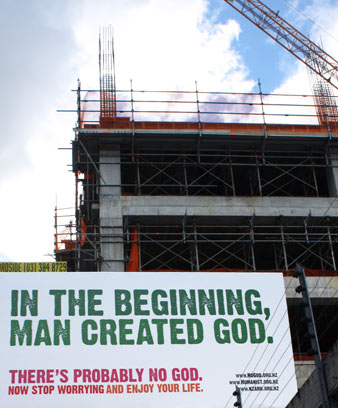 In the early 21st century, two out of five New Zealanders described themselves as having no religion, and many churches had been sold and converted to other uses. Atheism and secularism have a long history in New Zealand, with freethinkers, rationalists and humanists all forming their own organisations.

In the early 21st century church attendance was low. Many churches had been sold and turned into cafés, bars and other facilities. But for most of New Zealand’s history of European settlement, most people were religious – almost all of them Christian.

New Zealand has never had an official religion, and church and state have always been separate. However, churches have had a strong influence on issues such as alcohol, censorship, gambling and education.

Secular means not religious, sacred, spiritual or superstitious. Since the 19th century many people have questioned religious belief systems. Atheists believe there is no God. Agnostics believe that people cannot know whether or not there is a God. Rationalists believe in reason and knowledge, not faith. They attack religion where it affects the lives of non-believers. Humanists focus on human, not supernatural, matters.

Freethinkers, who based their opinions on science, logic and reason, set up groups from the 1850s. Premiers Robert Stout and John Ballance were both freethinkers.

Rationalist groups were set up from the 1920s, and hundreds of people attended their weekly meetings. Some younger rationalists broke away and became known as humanists. They were more concerned with issues such as racism, sexism, peace and justice than with attacking religion.

In the 21st century the NZ Skeptics worked to expose the lack of scientific evidence for psychic abilities, alternative medicine and creationism (the belief that God created the earth).

In the 2013 census 42% of the population said they had no religion. This proportion has grown over time – in 1956 it was only 0.5%. In the 21st century younger people and men were more likely to have no religion. However, many people did not answer the census question on religion.

New Zealand has become increasingly secular. Political leaders in the US often talk about God, but New Zealand politicians are unlikely to do so. Being associated with religion can cause problems – National Party leader Don Brash lost public support after he met with leaders of the Exclusive Brethren before the 2005 election.

Attempts to prevent religious satire or criticism have often been unsuccessful. The courts see freedom of expression as more important.

However, some Christian traditions remain – such as shops having to close on Good Friday and Christmas Day, and the national anthem asking God to defend New Zealand.