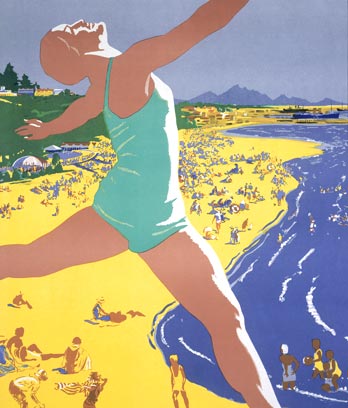 Sun, sand and surf make a perfect holiday. For many New Zealanders, the beach is the essence of the Kiwi dream – a place of freedom, relaxation, fun and escape. The beach, though, has also been important as a road and a runway, for herding sheep to waiting boats, and as a source of food.

At first, travelling in New Zealand was difficult because of the many mountains and swamps. In some places, people used the beach as a road – for walking, riding horses, herding sheep, and driving. The first car races were held on a beach, and early aeroplanes used it as a runway.

People have always gathered shellfish and fished at the beach. In the early days, they sometimes ate seals, sea lions and whales that became stranded on the shore.

Māori children learnt to swim from an early age, they played in small canoes, and surfed. European early settlers were more formal at the beach – they had picnics, walked, children paddled, but people seldom swam. Some beaches had pony rides, a skating rink, and birds and monkeys on display.

From the 1900s, swimming became popular. Men and women wore costumes that covered their body, arms and legs. These bathing suits were made from wool, which was heavy and took a long time to dry.

In the 1920s, women wore one-piece suits with a skirt attached. As sunbathing became popular, togs were sleeveless, the back was cut away, and the material was body-hugging. In the 1960s, bikinis were in fashion.

Sunburn and skin cancer are also a risk. People are now told to wear a hat, put on clothing, and use sunblock.

Half of New Zealand campgrounds are at beaches. The first holiday homes on the coast, called baches or cribs, were very simple. In the 2000s, more luxurious beach houses are being built.