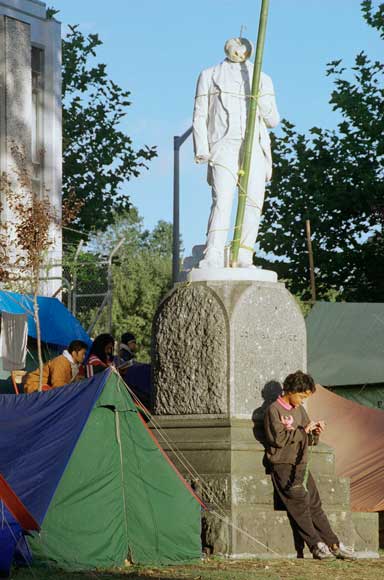 Twelve-year old Kia Kingi practises flax weaving beneath the pumpkin-headed statue of John Ballance during the 79-day occupation of Whanganui’s Moutoa Gardens (known as Pākaitore to Māori). The demonstrators believed Ballance – a former Whanganui MP and premier of New Zealand – had encouraged Māori land alienation, so they beheaded him as a symbolic protest. During the occupation the body was also removed from its plinth; the head and body were never recovered. A new bronze statue of Ballance was unveiled outside Whanganui’s civic centre in 2009.

The article forgot to mention

The article forgot to mention the little known quote of Ballance that 'the only good Maori is a dead Maori, friendly or otherwise' ... important to understanding the rejection of this figure in our history by those he spoke of.