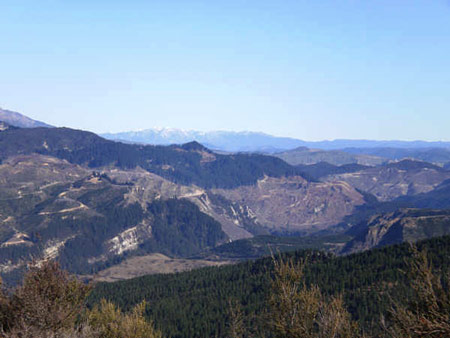 Pūtere is a farming district in northern Hawke’s Bay. This winter photograph looks west from Pūtere across typically broken country; part in plantation forest, part cleared forest, part in pasture. The snow-capped Ahimanawa Range, which flanks the Napier–Taupō road (State Highway 5) can be seen in the distance.

Contributed by Ian and Carolyn Brickel

Pūtere district is a remote and attractive area of northern Hawke’s Bay, bounded by the native forest of Urewera National Park and Lake Waikaremoana to the north, and the Mōhaka River to the south.

Three small lakes provide recreational fishing, duck shooting, boating and, in recent times, training for the kayaking section of the ‘Lake to Lighthouse’: a two day endurance race from Waikaremoana to a lighthouse relocated to the middle of Wairoa, encompassing some of the most challenging terrain in New Zealand.

In April 1967 we moved into the district, being the successful applicants for Farm 3, Otoi Farm Settlement. After the Second World War the government settled returned servicemen on Crown land that had been developed for farming. This continued into the 1960s and 1970s as civilian settlement. For many young couples this was their only chance to own a farm.

It never was easy to save the 15% deposit. Money was earned from shearing, fencing, deer culling, possum skins (in our case) and family assistance (in some other cases), or combination of two or more. When the opportunity came to freehold the farms (initially the land was leased from the Crown) fixed interest rate loans were a real help, but this changed after we were settled.

Initially the whole farm had been developed into good pasture, but subdivided into just six paddocks. Now it is more than 40. Throughout we have run sheep and cattle, usually in proportions 60:40 (in favour of sheep). Areas have been planted in pines, redwoods, blackwoods, lusitanica and eucalyptus for timber, poplars, willows and wattles for conservation and bees.

In three instances whole farms have been purchased for forestry. A number of farms have tracts of native bush that have been placed under covenant – secure for future generations. One such area near the confluence of the Te Hoe and Mōhaka rivers contains some magnificent old trees, part of an ancient forest, which somehow escaped the fires from the earlier volcanic eruptions.

When we first came to the district access to town (Wairoa) was an hour’s journey along the notorious Pūtere Road to Raupunga and over the Mōhaka hill. Now it is a much easier 40-minute trip via State Highway 38.

The biggest weather events of our 42 years both occurred in the 1980s – drought in 1983 and Cyclone Bola in 1988. During Bola, in 24 hours more than a metre of rain fell at the Willow Flat Road bridge across the Mōhaka River, and some side creeks filled up as much as 10 metres. But it was the drought that did more damage farming wise: the grass still grew after Bola, but not during the drought.

The district has a strong local spirit. When the farms were first settled land was set aside and levelled for a domain and rugby field, and we fundraised to build a community hall. To this day the Pūtere domain is regularly used for school camps, motocross events, horse trekkers, caravan clubs, four-wheel drive rallies, our very popular Christmas pantomime and other district functions. Indeed, the district slogan is ‘Pūtere – home of hospitality’.

Pūtere school first opened in 1925, but closed in 1936. It reopened again in March 1960. In the 1970s, as a result of land settlement, the school was bursting at the seams. Today just 12 children attend the school, but because of the remoteness of the district its future is secure – indeed it’s being rebuilt.

Pūtere district is an historic part of the North Island, and in no respect more so than in witnessing events in the life of the warrior and prophetic leader Te Kooti. He sought refuge in the area between November 1871 and January 1872. The mountain Ngātapa and nearby ‘Te Kooti’s lookout’, at the junction of the Mōhaka and Te Hoe rivers, are both associated with him. And the last engagement of the wars, in April 1872, took place on the Mangaone stream at Pūtere, not far from where it joins the Waiau River.