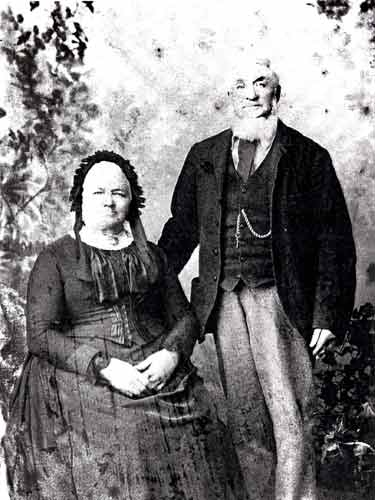 George and Mary Cooper, pictured here in their eighties when they were well settled in New Zealand, emigrated with six children in 1850–1851.

Contributed by Anthony Carrell of Dunedin, a descendant of the Coopers

In December 1850 George and Mary Cooper and their six children left their home in Morton-on-Marsh in Gloucestershire and journeyed to the London port of Gravesend. There, along with 173 others, they boarded the Travancore to sail to Port Cooper (Lyttelton Harbour).

George learned from an immigration agent that the more he contributed to the cost of the family’s fare, the greater the chance of securing an early passage. So he and Mary decided to pay half of the total fare – £8 10s. for each adult and half that for each child over one year. The Canterbury Association paid the remaining half by way of a loan. Eldest daughter Mary had just turned 12 and so was deemed an adult; youngest son George had only a week before he turned one. So, by being just a few weeks late, George the elder had found himself having to pay considerably more than he would have wished. He would have to pay the balance of the fare once he had settled in his new home.

At noon on Friday 6 December 1850, the Travancore sailed out into the English Channel; the Coopers’ voyage to their new home had begun.

The next 10 days were extremely rough as the ship sailed down the Channel and into the Bay of Biscay.

By early January 1851 more settled weather prevailed and the family were able to enjoy shipboard life. George and Mary involved themselves in drama and musical recitals. Mary and Sarah (aged 11) enjoyed the phosphorescent lights of the tropical sea at night. Six-year-old Robert took great interest in the starlings that were onboard. It was hoped these would last the voyage and be the start of the starling colony in New Zealand. Unfortunately only four survived the tribulations of the Bay. Three of these later died and the fourth escaped. It would be another 11 years before starlings were successfully introduced.

Early in the voyage, George was appointed a ship’s constable. Among his duties, he was required to supervise the married couples and single men. On arrival at Port Cooper, he received £2 2s. 6d. for these services.

However the voyage was not pleasant for one member of the family; three-year-old Fanny suffered badly. The Travancore’smedical surgeon’s log, held in the Canterbury branch of the National Archives, chronicles Fanny’s ordeal:

23 January – Weakness of lower extremities, could walk when she embarked but can now scarcely stand

26 January – Eats nothing, is losing flesh, legs still swollen and pained to touch

However this was short-lived and by March Fanny had deteriorated badly:

The next day, 31 March 1851, the Travancore arrived at Port Cooper. But Fanny never recovered from her voyage. She lived for only a week more. On 7 April, Fanny was buried in the Lyttelton cemetery.

How sad the family must have felt as they began their new life in Canterbury.