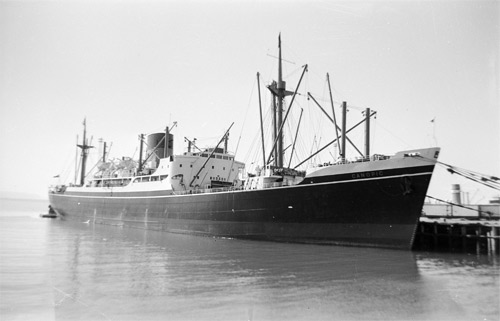 Graeme Eyre snatched his first look at his future country from on board this British merchant navy ship. The MV Canopic, a refrigerated ship on the Shaw Savill line, was on a two-year voyage to Australasia in 1960. Graeme was its third engineer - 'the lowest form of life on the ship'.

Contributed by Graeme Eyre of Paeroa

The year was 1960 and I had joined the merchant navy in England. I was making my first sea voyage on the Shaw Savill line refrigerated ship, MV Canopic. The crew had signed articles for a voyage to the Australasian continent not exceeding two years, which was a frightening thought for an innocent young man. I was only 22 years old at the time and knew nothing about New Zealand, other than that it was where butter and meat came from.

After a month at sea, including some atrocious weather, I was starting to worry that we would never see New Zealand, and beginning to believe in the old mariners’ tale about sailing off the edge of the world. One morning one of the old hands came in and said that New Zealand was off the starboard side if anybody wanted to have a look. There was a concerted rush by the ‘first trippers’, as we were known in those days.

My disappointment was overwhelming at the sight of the brown-coloured, barren-looking land on the horizon. I had sailed so far and put up with so much just to see this. As we sailed down the coast towards Auckland the scenery didn’t get much better. Off the East Coast Bays a few houses were starting to appear, and that was all.

As the lowest form of life on the ship (third electrician) I was banished to the engine room for our arrival in Auckland. I went below as we picked up the pilot. The ship proceeded into the Waitemata harbour and anchored in the stream while we were cleared to come alongside. I came out of the engine room onto the deck and was stunned by the sight of the city. It was mid-June and one of those cold cloudless days with brilliant sunshine. The sight of such a beautiful city, with a panoramic view from the centre of the harbour, is something I will never forget. It started a love affair with this country that has not diminished in my 40 years living here.

My feelings were reinforced when we left Auckland for our next port of call, Wellington. The same scenario presented itself as we approached Wellington Heads; barren-looking countryside with only a few houses in sight. I had the same duties as our arrival in Auckland, only coming out of the engine room when we anchored, waiting for a berth. There I was greeted by the sight of Oriental Bay in the early-morning light on another brilliantly sunny day, and thought to myself, ‘This cannot continue, the cities are getting more beautiful each time’.

The third port of call was Bluff in midwinter, at its very worst. This did not diminish my thoughts about New Zealand though, as I did what so many seafarers did in those days – met a New Zealand girl, fell in love and emigrated.

I flew out from England, as all the cabins on the immigrant ships were booked up for two years in advance. My fiancée and I had toured the government departments in Wellington, trying to get the paperwork necessary to move to this country, only to be told that my English passport was all I needed. I was suspicious at first, as it seemed too easy; something had to be wrong.

These suspicions proved to be groundless on my arrival at Whenuapai air base in 1963. The Customs and Immigration Control consisted of a small shed. I cleared customs and showed my passport to the immigration official, who asked me if I was here on holiday or here to live. I replied I would like to live here. He said, ‘Good on yer mate’ as he stamped my passport with a permanent residence stamp.

My life prior to joining the merchant navy consisted of living in the industrial north of England where, in the 1950s, the pollution, both air and water borne, cannot be imagined. The people there had inbred-English remoteness, distancing themselves from close contact with other people. By contrast, the open-heartedness and friendliness of New Zealanders and the cleanliness and beauty of this country have always amazed me.

This story is stranger than fiction, but it actually happened as described.

I moved to New Zealand in 1963 and my parents decided to follow me out early in 1964. They settled their affairs in the UK and booked a passage on the Southern Cross.

I had become disillusioned with working ashore and returned to a seafarer’s life with the Union Steamship Company. At the time my parents were due to arrive, my ship and I were stuck in Tasmania because of a wharf strike. I made some frantic phone calls and one of my new-found friends arranged to meet them when the ship arrived in Auckland. He said he would help them settle in and set them up, which was a huge relief to me. I gave them all physical descriptions to assist in recognising each other.

My parents’ ship was due alongside the wharf at 7 am and my friend duly turned up to meet them. This was where the plan failed miserably. Unbeknown to me, the Southern Cross did not call at Auckland but instead went on to Wellington. There was my friend, waiting on an empty wharf in Auckland while my parents sat on their suitcases on the wharf in Wellington, waiting to meet him.

The day passed and the ship was getting ready to sail. My father wanted to get back on and go back to the UK, but my mother said that as they had come all this way they weren’t giving up so easily. They booked into a hotel for the night and caught the first train up to Auckland the following day.

On arrival they booked into a motel in Remuera, and my mother went into the local shopping centre to buy some food. As she was walking down street a man stopped her and asked if her name was Dorothy. She said it was. He was my friend who was meant to meet them in Auckland the preceding day. He recognised my mother from the description I gave him. There must have been around half a million people in Auckland at that time – and the chances of two people bumping into and recognising each other are incalculable.

When I finally arrived in Auckland some weeks later, Robbie had found my father a job and set them both up in a flat. My parents had also started a relationship with this country that exists to the present day, where again, the average New Zealander’s friendliness and willingness to help had come to the fore.

To find the sun

Sorry, I was the lowest form,