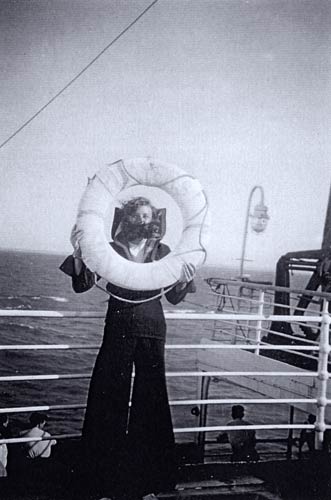 Gillian O’Rourke shows off her outfit for a fancy dress party on board the T.S.S. Captain Cook, bound for Wellington in 1955. Seamen unravelled rope to make her beard.

A friend informed me that she was going to emigrate to New Zealand for a couple of years, instead of going to Spain as was her custom. I jokingly said, ‘You can take me too’, and with my parent’s approval in no time I was filling in forms and visiting New Zealand House. I was only 17, so I had to get a J. P. to sign papers too. It then took nine months before we took the train to Glasgow to board the T.S.S. Captain Cook. It was September 1955 and I was now 18.

I was scared but excited. My friend and I shared a cabin with two other young women. Once at sea, seasickness took over. I never felt so ill in all my life and so did half the 1000 passengers. The boat had no stabilisers, so it took a long time to get used to the movement. Many of the passengers had plaster casts on their limbs from falling when the ship rolled. We also had no air conditioning, just small blowers in the ceiling of the cabin. Turning them on your body to cool gave me a cramp and one night, lockjaw. It was awful in the tropics.

The doctor refused to treat people with sunburn and told us to be fully clothed on deck. My feet were swollen and blue by then. There wasn’t anywhere to be cool, no swimming pool, and water in the taps was only available for an hour each meal time. We weren’t allowed to sleep on deck either and had to be in bed by 11 pm. Bathing was in salt water and if we had just left a port it usually had oil in it. I didn’t care. I didn’t know any different anyway. As far as I knew, all ships were the same!

The ship’s plumber passed away, I’m not sure of the reason. They had nowhere to keep him chilled so had to bury him at sea. The new baby and its mother had to be left (at Panama, I think) as the baby was ill. In tropical rains the boat got flooded – scary stuff. The crew were good, mostly Scottish. We ate well, even though there were three–four sittings at meal times. There were a number of army, navy and air force guys off to join the New Zealand forces.

The journey took six weeks and I had no idea where in New Zealand I would be going, until we anchored off shore in Wellington harbour. We were then ordered on deck and each handed a manila envelope which gave us that information. I was to go to Auckland and work in John’s Court off Queen Street.

Once off the boat, we were taken to the train station and asked to hand over one shilling. We were given a paper bag which had a Kiwi pie, a couple of sandwiches, an apple, and crisps. The shilling, however, was for a pillow and boy did I need it. The train reminded me of the old cowboy movies and it was as uncomfortable as it looked. It took 14 hours to reach Auckland. I couldn’t believe it!

In Auckland a bus was waiting to take us to Mangere Hostel, where on arrival they gave us a cuppa and some rules. We weren’t to stay longer than a week and then told to go back out and find our way to our place of work as we would be starting tomorrow. Boy! They were tough! We had to be back at 6 pm each night or miss our dinner. As we didn’t finish work till 5.30 pm this was impossible and we ended up eating pineapples, which at the time were only a shilling each. Didn’t do me any harm. I have now been here 48 years and love it.

A daughter of Neptune