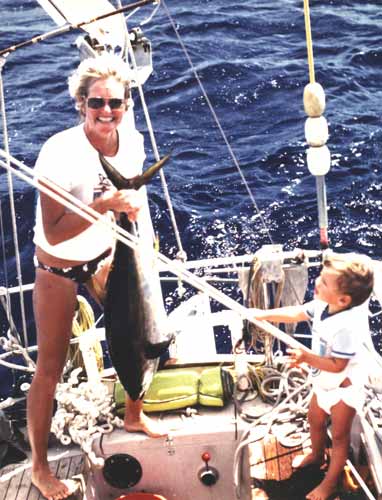 Pictured are Bonnie Schroyen and son Adam, aged two, with their dinner. This was taken in 1983, while the adventurous Schroyen family were en route from Canada to New Zealand on their 9-metre yacht.

Contributed by Bonnie Schroyen of Whangarei

We are Harvey and Bonnie Schroyen and our son Adam, who was two years old in 1983.

We arrived in New Zealand on a nine-metre yacht sailing from Vancouver, Canada, 20 years ago.

Harvey had always wanted to sail overseas and we had bought the boat a couple of years before. When we left Canada, we had no fixed destination and took the old saying, ‘For as long as it’s fun’ as our guide. We followed the west coast of the United States, spending a few months in California. We then sailed into Mexico until the hurricane season made us decide whether to head for home via Hawaii, or take the plunge and head south to Tahiti. We didn’t think about the next port after that.

Our longest off-shore trip was our 34-day crossing to Marquesas and although we had no bad weather it was sure great to see those high mountains from far out to sea and know we had navigated our way to land.

We were with a group of yachties as we sailed through the Pacific. They were a mixed group from all over the world and it was a great experience getting to know them.

We sailed on to the Cook Islands, Niue and Tonga. The South Pacific was a fantastic cruising ground. Again the weather hurried us on our way and we headed for New Zealand in early November.

Our trip took 11 days from Tonga and our first port was Whangaroa Harbour. As we turned the corner into the flat calm of the harbour we saw for the first time the lush tropical growth on shore. After living in rough conditions during the trip, sleeping on the floor as it was so rough we couldn’t sleep in the bunks, and eating cold canned food, it was a treat to sleep in relative comfort and have a good cooked meal.

The next day we headed down to Opua to clear customs and set foot on New Zealand soil. At the time we thought this was a wonderful stop on our continuing journey but 20 years later somehow we are still here. We’ve sold the boat recently, bought a house and live at the beach near Whangarei. We visit Canada now and then but this is home.

From refugee to reverend