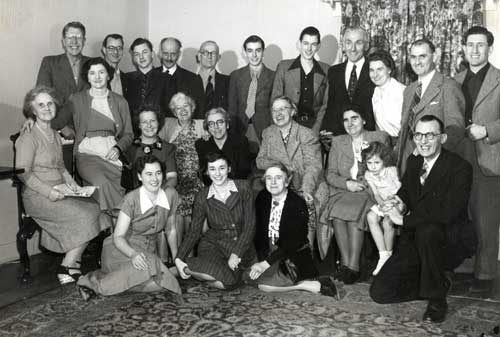 Twelve members of Chris Thorogood’s family were among this group of British citizens stranded in San Francisco in 1949. On their way to settle in New Zealand, a storm grounded their ship in the English Channel and so they missed their connecting flight in the USA. After this picture appeared in San Francisco newspapers, the group managed to charter a plane to New Zealand. Chris Thorogood and his parents are third, fourth and fifth from right in the back row, with his sister and grandmother in front.

Contributed by Chris Thorogood, of Napier

During World War II, an RNZAF pilot attached to RAF Bomber Command called on my grandparents in England. It transpired that he was a second cousin. As a result of his call and enthusiasm for his home country, three complete generations of my mother’s family determined to emigrate to Feilding, New Zealand.

My parents decided to travel to New York on the Queen Mary, cross the USA by train to San Francisco then fly to Auckland, New Zealand. So, on New Year’s Eve 1948 we set sail.

Following an exceedingly rough passage across to France, and as the inner harbour of Cherbourg was strewn with sunken wrecks (thanks to WWII), the ship was obliged to anchor in the outer harbour, which in turn was experiencing one of the worst of its notorious howling north-westerlies.

Once the French passengers had boarded, raising anchor was commenced. However, the severe gale swung the great ship around, causing the trailing anchor to snag a six-inch thick ‘Pluto’ anti-submarine cable. Consternation reigned equally amongst the 3000-odd passengers and crew, as the ship began drifting towards a signal buoy marking the nearest underwater wreck. If this was hit, it could well have pierced the hull.

All this was occurring in total darkness (apart from the ship’s powerful spotlights) and in very high seas, which were causing considerable seasickness for most on board.

The ship finally grounded, fortunately not onto the harbour’s rock base but a more forgiving sandbank, where we rolled around until high tide early the following morning. During the night, the ship engineers had been able to sever the anchor cable.

We returned to Southampton where many tons of concrete were poured into the hull, temporarily plugging the leaks. After a further five days wharf-side, the ship was judged fit enough to brave the winter Atlantic trip to New York.

Three days and nights of travel on the train from New York to San Francisco passed without major incident. However, the earlier delay meant lost air bookings from San Francisco to Auckland, so we received an unexpected 10 days in San Francisco, paid for by our travel company.

The only plane available at short notice was an unmodified troop carrier from the Siamese Air Service. The somewhat limited seating consisted of a canvas seat stretching on each side, for the length of the available fuselage space. We all sat in two long rows, facing each other across the narrow aircraft. Our beds each night were lilos, inflated by removing a centre bung from one of the aircraft’s small viewing windows, and pushing the tube connected to the lilo out into the slipstream. The lilos filled up very quickly with the cold and rather rarefied air.

One night, as we endeavoured to get some sleep, we suddenly found ourselves elevated above the deck, then bumping down onto it, and then up in the air again. This continued a number of times and we all awaited the final big splash, which fortunately never came. Our pilots managed to convey to us next morning, in broken English, that we had flown into a massive air pocket, considerably greater that anything they had ever experienced in their many years of flying, and that they too had wondered if our rapid descent was going to stop in time.

We had also achieved a record for the longest number of continuous hours in the air, for a civilian flight.

And then finally, after 26 instead of 10 most eventful days, we were gazing down onto what appeared to be a smallish town. It was Auckland, 1949. We landed with no problems at all onto New Zealand’s international airport, RNZAF Station, Whenuapai.