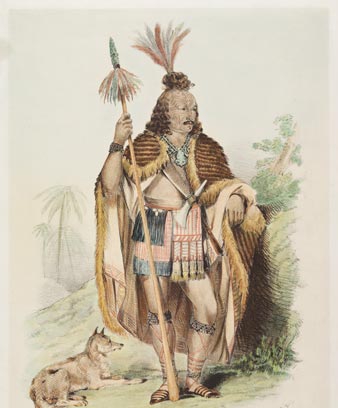 From the very first meetings between Māori and non-Māori, people who could bridge the gap between them have been important. Early go-betweens usually learned the language of the other group, and understood their customs.

Tupaia was a Tahitian priest who visited New Zealand in 1769 on British navigator James Cook’s ship the Endeavour. He interpreted between Māori and the ship’s crew.

Ruatara was a Ngāpuhi chief who worked on European whaling ships, visiting several countries and learning English. When he returned to New Zealand he introduced European foods and animals, and helped protect early missionaries.

Pākehā–Māori were Europeans who lived with Māori as part of the tribe, often marrying Māori women. Some were traders, whalers and sealers, while others were runaway seamen and convicts. Other Pākehā often looked down on them.

Missionaries needed to know Māori language and customs. They often taught Māori to read and write, and to farm using European methods. Missionaries arrived in the Bay of Islands with Ruatara in 1814. They believed that teaching Māori useful skills and farming would encourage them to become Christians.

The missionary William Williams, and his son and grandson, wrote and published Māori-language books and dictionaries.

Writers, artists and thinkers who have acted as cultural go-betweens include: