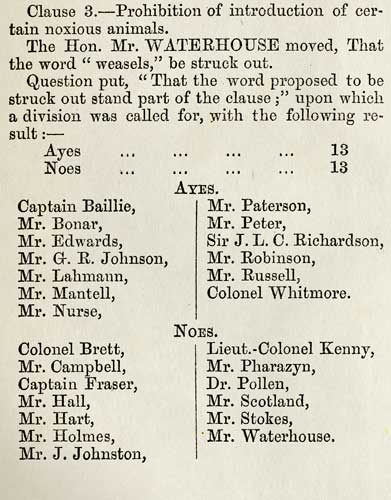 Read extracts from the debate on the Noxious Animals Prohibition Bill 1876. They show the contrasting views that people held at that time. Rabbits were doing such damage to farmland that some people called for the introduction of mustelids – ferrets (then called polecats), stoats and weasels – to control them. But scientists and others were concerned about the harm that these animals would do to native birds. The bill banning the use of stoats was passed by the House of Representatives. But it was defeated in the Legislative Council, which was dominated by landowners who felt that wiping out rabbits on farmland was more important than saving native birds.