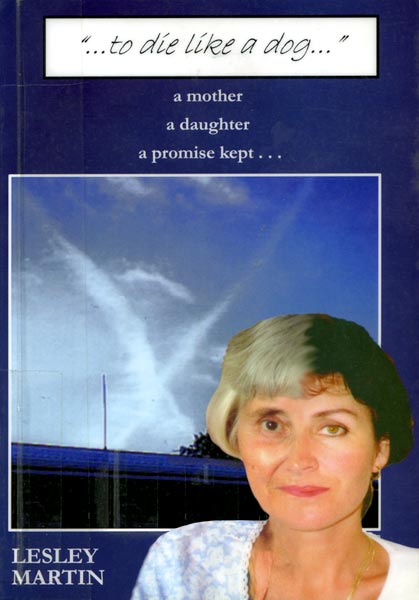 To die like a dog, published in 2003, was Lesley Martin's personal account of what she did to cause her mother's death and why she did it. Joy Martin had received surgery for renal cancer and experienced complications after the surgery. She had terminal liver cancer, was bedridden, had a colostomy and asked her daughter to make sure that she did not die 'inch by inch'. Joy Martin died on 28 May 1999 as a result of an overdose of morphine. Police investigated the death, but closed the investigation after 10 months. However, after the publication of Martin's book, she was charged with attempted murder. In April 2004 she was found guilty of attempting to murder her mother by administering 60 milligrams of morphine, and sentenced to 15 months imprisonment. Martin was released after serving half her sentence and continues to actively advocate for the legalisation of euthanasia.

Te Ara - The Encyclopedia of New Zealand
Reference: Lesley Martin, "- to die like a dog - ": the personal face of the euthanasia debate. Whanganui: M-Press, 2002