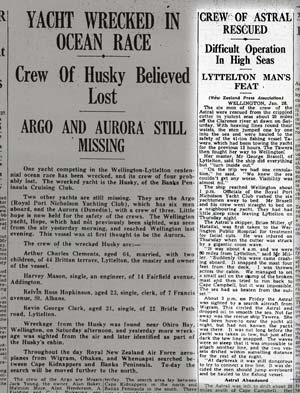 On 23 January 1951, 19 yachts left Wellington in a Canterbury centennial race to Lyttelton. They sailed into a fierce southerly storm. A week later the Press headlines told the story – the wreckage of the Husky had been found near Ōhiro Bay, Wellington, and the four crew had perished. The Argo was still missing, and eventually it was determined that all six crew members had lost their lives. The Aurora, however, survived, and six men from the Astral were rescued in dramatic circumstances.

Download this document to read a transcript of the newspaper report (64 KB).